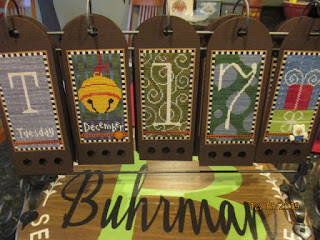 Greetings from Christmas Central where gifts are being finished, wrapped, shipped or categorized for Christmas day giving. Whew, I think I am a bit ahead of the game...for now. Still debating on whether I'm going to make my usual amounts of cookies, or scale back a bit since we don't need to eat them all!!

I wanted to stop by and share the ornaments for the grands this year and , if you ever hear me say "needlepoint" again, just SHOOT me. These took a LOT longer than anticipated and I quickly remembered why I gave up needlepoint years ago. Now I have always stitched needlepoint in hand so blocking was always an issue. But these being small, I put them on stretcher bars and they came out perfectly straight--now that is a plus! And, they all did turn out very cute and were a bargain at 50 cents a canvas, so I won't complain too much. Here are the four of them together: 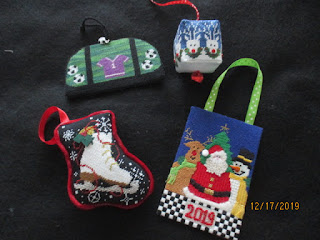 
James....who lives and breathes soccer. He is #1 on his team and that happened to be the # on the shirt--perfect! I stitched the shirt in his school team colors and  found the soccer ball charm at Hobby Lobby. This had a stitched back, too, with a soccer shoe and balls but I forgot to take a photo. :( 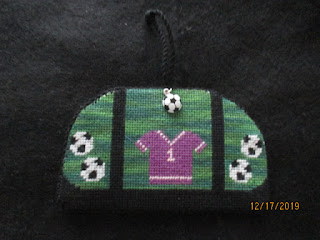 Asher.... I added tiny red buttons for the noses and hung red bell at bottom. Design goes all around the piece--8 reindeer! 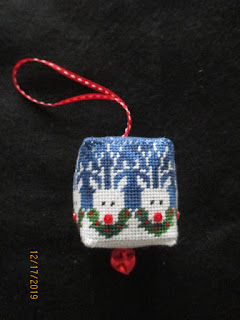 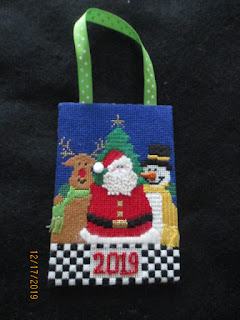 Cora....added JABCO holly button and red velveteen trim, which melted when I went to press it after handing for stuffing. Drats..won't make that mistake again!!! 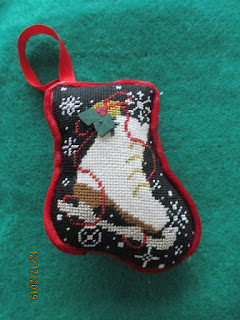 Merry Christmas to all and thanks for stopping by and your "twisted threads" of friendship! 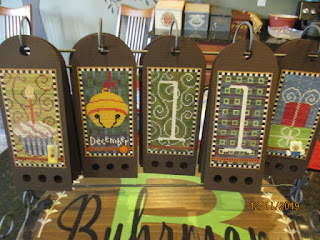 Greetings! Are you in the midst of the crazy holiday rush? I am trying hard to remain calm, cool and collected but as Christmas nears, I am getting a little tense......time to break out the CBD oil??? I am all decorated but still have shopping to do, cookies to bake, meal planning and driving to Baltimore to bring my parents down for Christmas. What will be, will be is the mantra I am trying to follow!!! :)

I'll start with a little recap of our week in Black Mountain, NC. We have stayed at High Rock Rentals three times now and it is a beautiful, relaxing spot. This year we stayed at a new, larger cabin to accommodate our expanding family and pulled in just in time to see out SIL struggling to get up the steepest hill ever!!! He kept spinning out on the gravel road (they have front wheel drive) and finally had to back up, pull over and let us try with our all wheel drive. We made it, but had to unload their van, carry everything from it up the steep hill and then without the weight in the back, he was able to make it up the rest of the way. Not the best way to start our week but it was uphill (pun intended) after that!! Here's a shot of the hill and the 90 degree turn towards the end!!!

Here is a shot of the cabin from across the holler.... 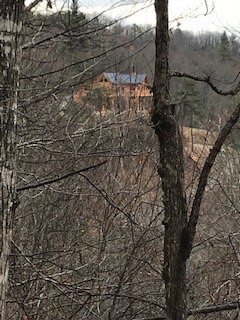 From there it was a week of beautiful sunrises.... 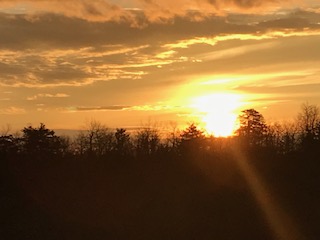 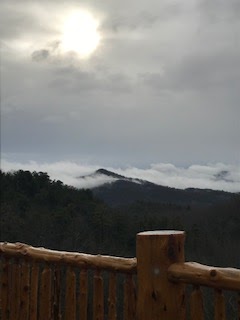 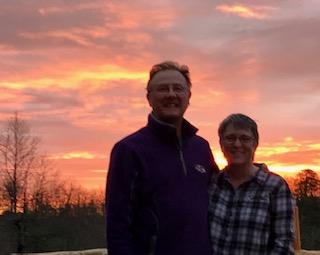 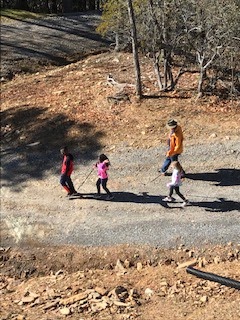 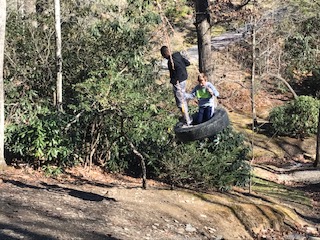 Stitching on the porch... 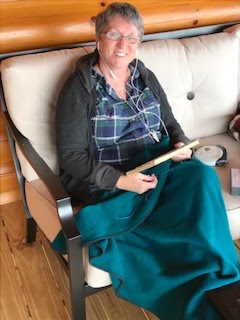 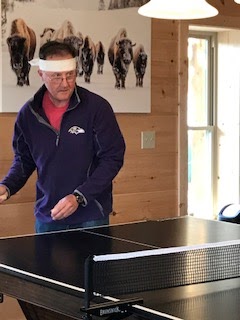 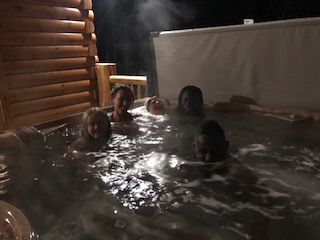 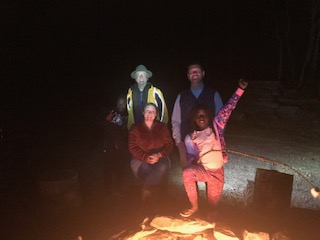 And a delicious Thanksgiving dinner lovingly prepared by our SIL, Alex.... 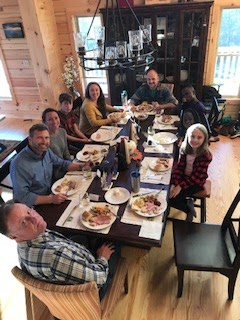 All in all a grand week relaxing, bonding and joy!!! I did get quite a bit of stitching done while there. I did manage, on our last day, to squeak in a visit to Sassy Jacks. I didn't get much but was very pleased when my younger daughter bought a kit to try...maybe there is still hope!!! Here is what I bought: 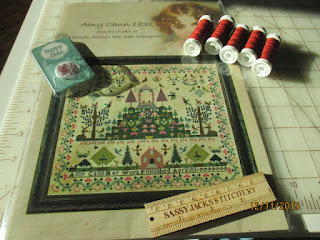 While in NC I finished another Xmas ornament and got about 3/4 of the last one done ( I did finish that one later at home). Now to finish-finish all four!!! 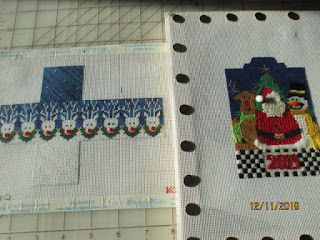 Last weekend on the FB page, Our Sampler Years- Yesterday's Needlework for Today, people were sharing their perforated paper pieces. This prompted me to pull out some Tokens and Trinkets I had bought when they were closing down. I got this little stocking done--isn't it sweet? It was a chart by Wendy White for Redefined, Inc. I stitched it with DMC 75, a variegated red and changed the wording out...now to figure out what to do with it. 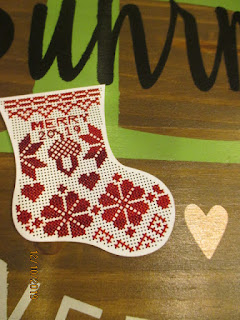 I've also been working on a few gifts, but they will have to wait until after Christmas to share.

I was lucky to take a class yesterday, offered by the VGN, from Simona of Mani di Donna. It is called Winter Harmony Basket. Here is Simona's model: 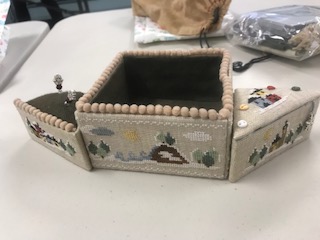 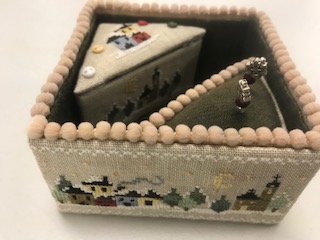 Last, but not least, I was able to go to the boutique at Christmas in Williamsburg last Friday. I mainly bought gifts, so sadly can't share those, but did want to share some of the lovely decorations we saw while strolling Duke of Gloucester Street. They are made from natural materials and items that would have been available in colonial times....always so pretty! 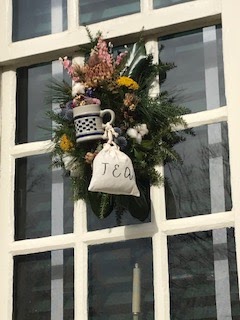 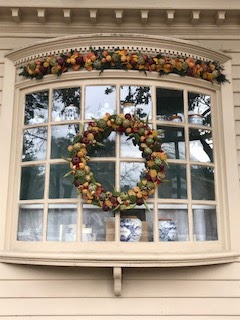 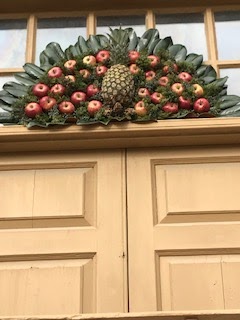 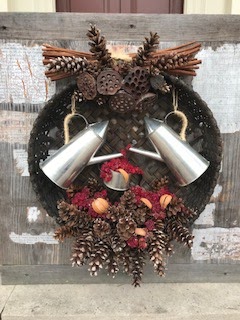 Thanks for hanging in with me for this long post. I hope to be back before Christmas but can't guarantee it so, if not, please have a very Merry and blessed Christmas/holiday season and...thanks, as always, for your "twisted threads" of friendship!