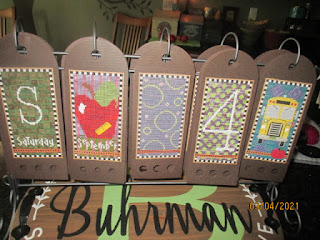 Greetings! August continued to be hot, humid and steamy and I continued to stay home in the A/C and stitch as much as possible. We did have a moment of 'crisis' when our A/C went down on a weekend, but were able to get it fixed quickly. Such a minor complaint compared to what people down south are dealing with.......holding them in my thoughts and prayers.

School has started up again and, even though we don't have school age children, we have to refer to the school schedules for start/end times. We live off a two lane road that has 5 schools within 3-4 miles. We have a huge bus driver shortage so the superintendent has asked parents to drive their kids to/from school.....major backups and you can be sitting for 30 minutes since the parents cars actually back up onto the main road. Very frustrating, but we are lucky we can be flexible and not have to get to work.

I'm sounding like Debbie Downer today, so I will move quickly on to some stitching updates. First up are my finishes and additions to my Stitch Stroll.

I've been participating in a Christmas ornament SAL on IG hosted by our friend, Carol of Stitching Dreams. I've been trying to get a little ahead of the game, knowing I'll have Christmas stitching to do......so here are my August and September ornaments. 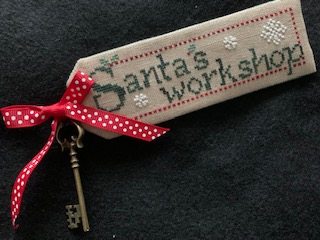 Santa's Workshop by The Nebby Needle....stitched on 36 ct. mystery linen and finished per instructions. 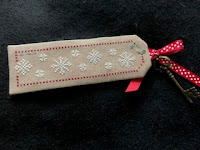 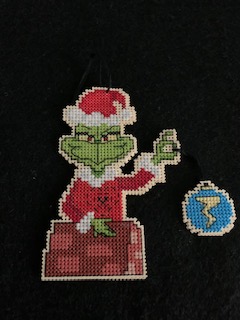 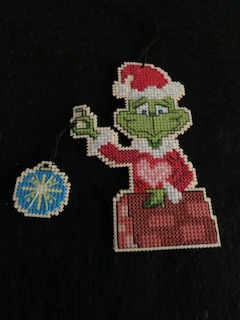 I completed the Jade Band Sampler SAL from iStitch Designs.  This was stitched on 4'' 28 ct. antique white banding with a chevron edge. I used VMS Ocean Waves and Faded Sampler Blue with a splash of HDF Yellow Spice. 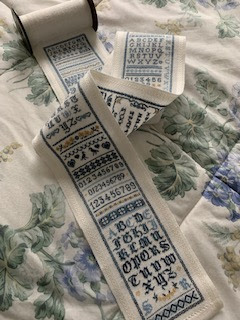 I squeaked in this cutie at the end of the Olympics. I loved the spot on the Olympic pictograms where real people demonstrated 50 different sports in 3 minutes. If you didn't see it, you can probably find on youtube. Some clever person (Noriko Soh) designed a pictogram for embroidery. Stitched on 40 ct. Ivory linen, over one, with VMS Necessaire Blue and popped in a Tim Holtz pocket watch with red, white and blue beads. 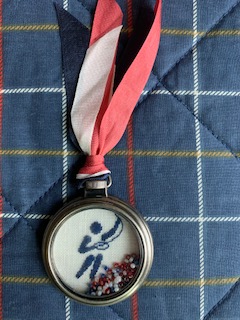 I had to get to the stitching of  Tomayto, Tomahto by Hands on Design when I started seeing everyone's shares on FB and IG. What a cute set!!! Stitched and finished as called for thanks to the fabulous instructions by Cathy. My favorite part is how the tomato is magnetized to the tray...so clever!!! 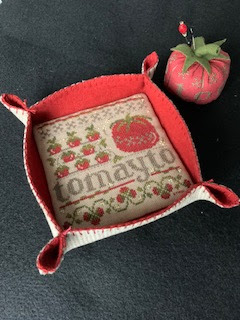 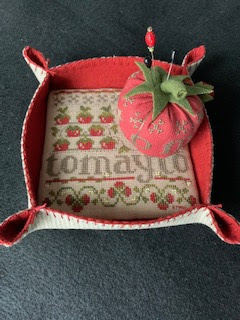 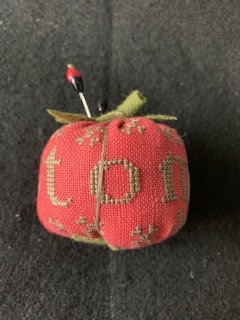 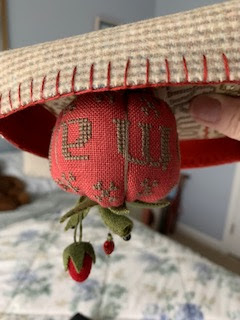 This next piece came to mind after finishing the 3D  tomato. It was stitched in 2011 and  FFO'd just in time for autumn display. It's Three Pumpkins by Prairie Grove Peddler. I don't recall the fabric and substituted GAST for the DMC. 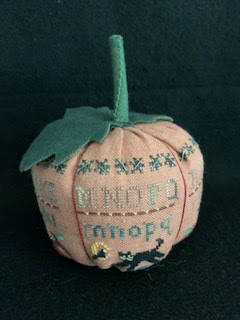 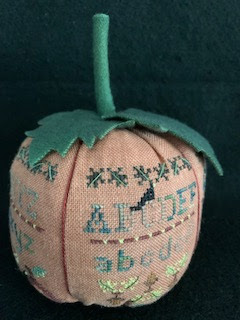 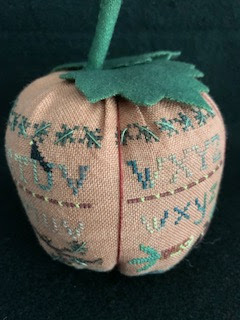 The final finish, finish was a quick and easy one.....Stitch by Shepherds Bush. I saw a video on FB with Terri, from Shepherds Bush, talking about this chart and the sweet mesh bags you can stitch it on. I need another project bag like a hole in the head, but was on the phone ordering the next day. There are three colors: rose, grey and green...guess you know which one I chose for me!!! Stitched with #5 perle cottons (I used colors I had on hand) directly on the mesh and ready to use immediately! 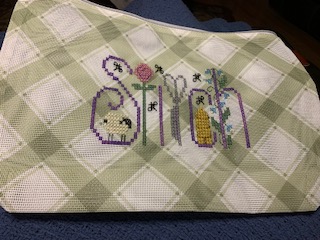 I participated in the Common Threaded Stitcher event on IG where you were given a different prompt each day in August. One of the prompts was "what is your oldest WIP"? Well, that prompted me to find mine and this is what I determined it to be: an old series by Curtis Boehringer called 3 for 2.  It consisted of a monthly chart with 3 small designs for $2.00!!! This was back in the mid to late 90's and I decided to try my hand at over one stitching....thanks to inspiration from Ruth Sparrow at Twisted Threads. I picked the designs that included alphabets and managed to get August and September done at the time. I have added October, November and December this past month; they only take an evening to do! Aren't they the cutest??? I even have an old Hog River frame I must have bought at the time to pop them in. I'll try to keep squeezing them in when I can because I really do love them...even after all these years!!! 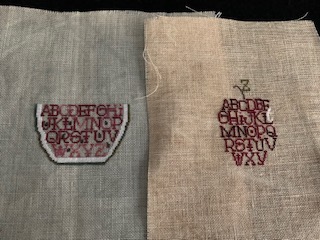 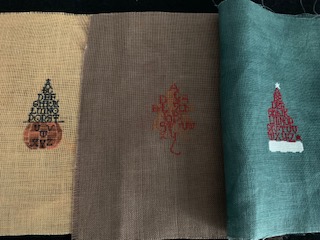 I did the August Wordplay as called for...coming around to third base on these! 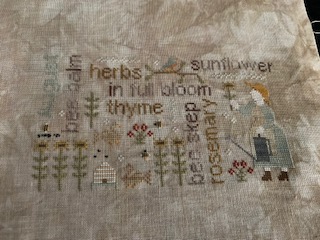 And I stitched The Stitching Bee by Little House Needleworks. 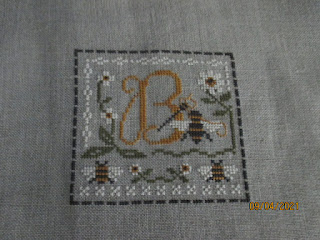 I'm finding that stitching small/quick projects is helping to keep my mind off the craziness out there!!! I think the excitement of putting that first stitch in keeps me stimulated and focused on a positive. How are you all coping? Tackling huge projects? Picking up new hobbies?

I  have started back on my Bee Contained piece by Betsy Morgan but met a little obstacle when my granddaughter unscrewed a piece on my Lowery and it fell to the floor and a piece broke off that makes it tough to clamp down on my scroll rod. We've been trying to figure out a solution; I know it's a tiny inexpensive fix, but hard to navigate the shallow area it needs to be slipped into. I know...clear as mud..but hoping to have a friend show me theirs next week, so I can actually see what was in there. I'll share photos of Bee Contained  next time as this is running on...and on....

As always, thanks for stopping by and your "twisted threads" of friendship!