I've managed to have a few quiet days to get some finishing done before the year rolls over. It is always amazing to look back and see how much I've accomplished. Somehow, it doesn't seem like that much during the actual year....and that's because there is always so much more I want to get to. There are so many wonderful designers and teachers and classes and retreats and clubs.....if only!!!

But here are my final finishes to share...first up is A Stitchers Name Tag by La-D-Da. Igot this limited edition kit at The Attic last November and am thrilled to have it finished to wear to classes/seminars. I opted for only my first name so I could fit a beehive. I added some Twisted Threads Bees to buzz around the hive and flower and a bee pin my Mom gave me. I also added a little fairy pin, from my friend Paola, at the bottom right. Otherwise, done as it came in the kit. 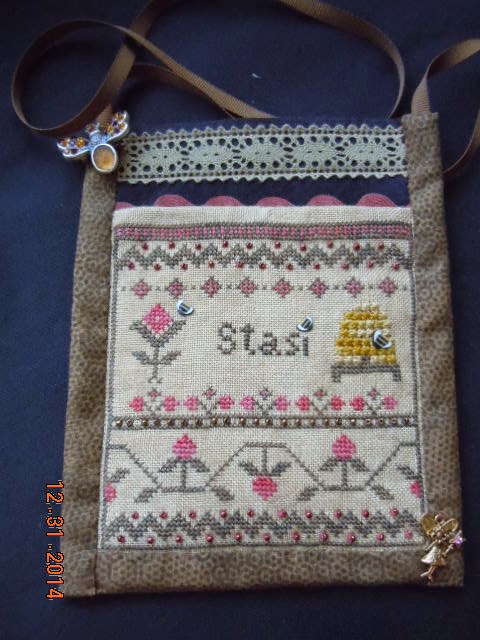 Next is the Coverlet Candle Mat by The Scarlett House. This was one of the Colonial Gatherings kits from Dyeing to Stitch. This was stitched and finished as called for. Not sure I want to sit a candle on it, but once the Xmas decorations are down, I'll find a spot and see what works. 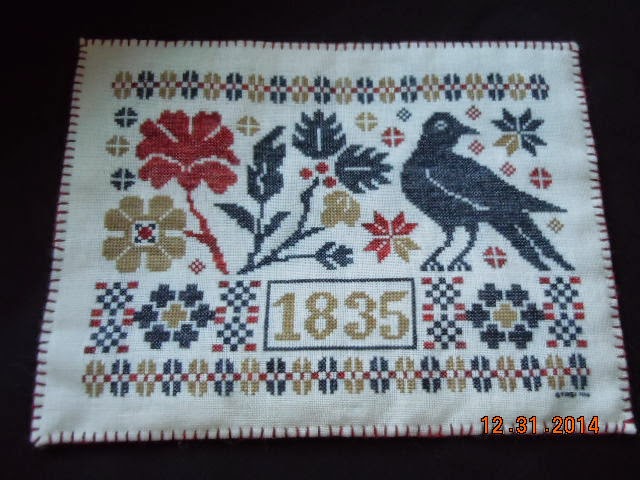 This is another Colonial Gatherings kit called Strawberry House, again from The Scarlett House. I only had to stuff this, so it was a quickie!!! 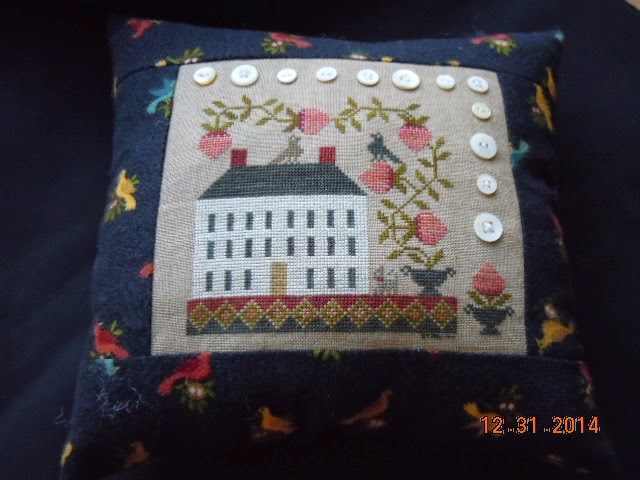 Next up is a make it, take it from Jackie du Plessis called Stitcher's Pouch. Stitched as called for though I haven't been able to figure out how a piece of wool goes on the front. Hoping to see it finished in person one day so I can figure it out! :) (Although I'm happy with how it looks as is!) 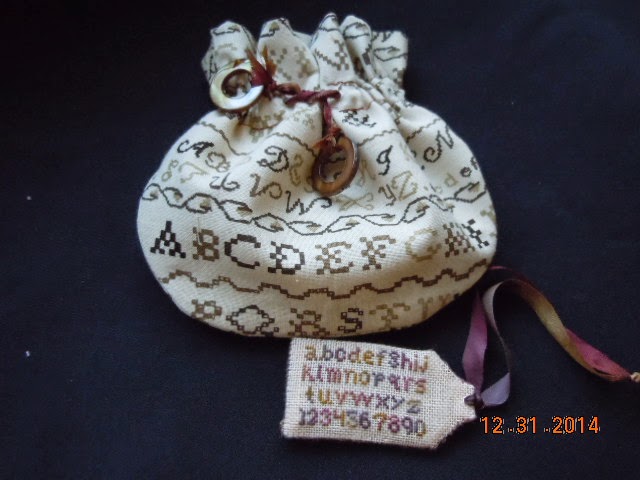 Finally, is Pin Skep by Kathy Schmitz. Now I'm not real happy with how this turned out. It was supposed to be a "drum" shape but mine is short and squatty. It didn't say on the pattern if a seam allowance was included ...or not.. and so I assumed (and you know what they say when you do that) that the seam allowance was included in the pattern top/bottom. I think I should have added it....because my top  and bottom pieces did not fit the cylinder section and I have major puckers/pleats that I didn't want. Now I know I could have taken it apart and fixed all this, but was afraid the linen would unravel too much....and I'd have to restitch the top and didn't have enough fabric. The original called for some chenille trim around the top but I don't think that will work on my finished shape.  So...............it will remain as is, as a reminder to me to think things through better before I act! And the JABCO bee buttons kind of spruce it up!!! 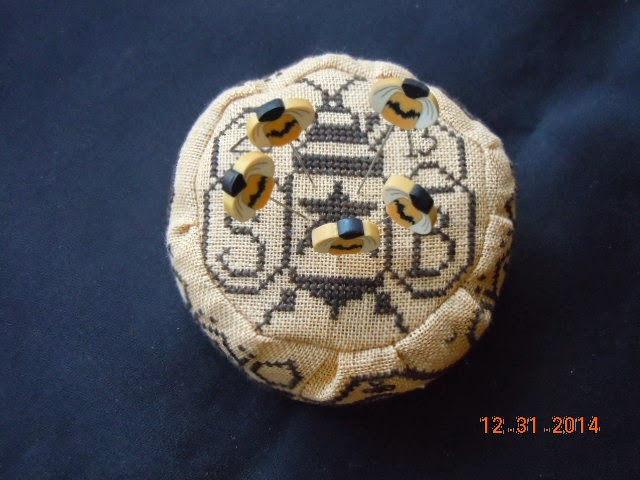 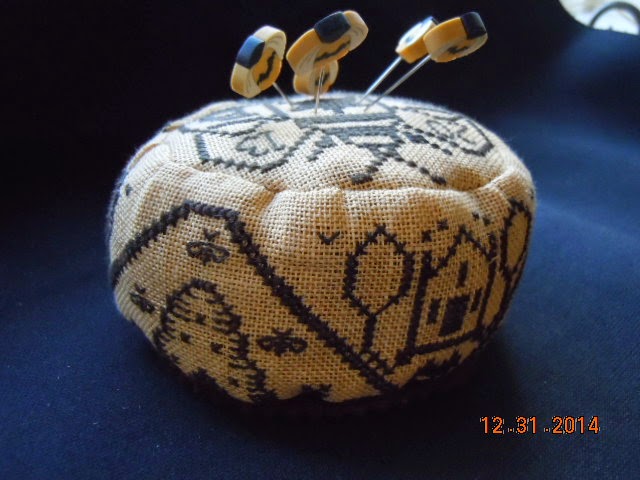 So now I have to ponder what I want to work on in 2015..always a lot of fun to start new projects. Have some ideas and will share soon!

Last but not least, I wanted to share a couple photos of the grand kids at Christmas. So here they are with some of their favorite gifts! 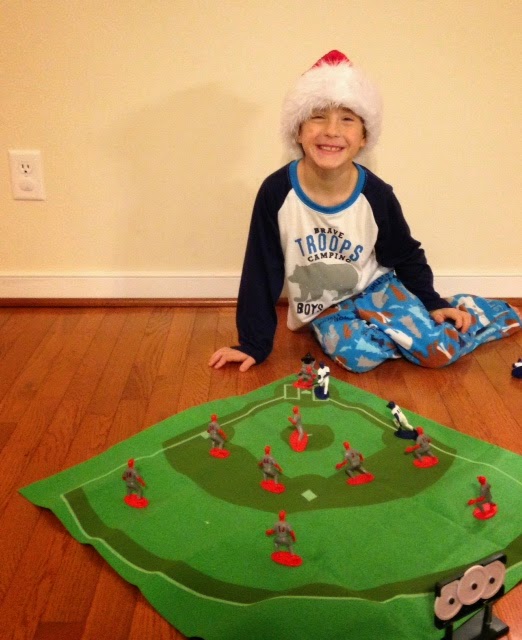 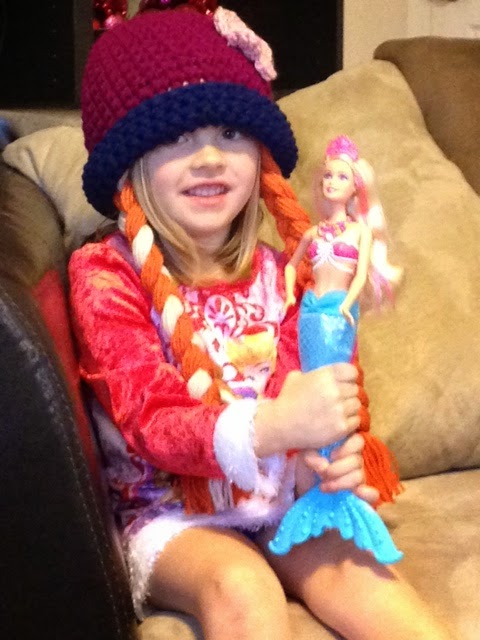 Thanks for stopping by and your "twisted threads" of friendship! Be safe tonight if you're heading out!
Stasi
Posted by Stasi at 11:21 AM 4 comments:

This will be a quick post...I promise! I've finished up some more ornaments I'd like to share.

First up is this years ornament for my grandson. He is obsessed with baseball and plays catch with himself(and anybody else he can con into playing) pretty much all day long. He bounces small soft balls off his bedroom wall and dives for them on the floor. He is a "ball" of energy (pardon the pun)!!! So, I was very happy when I found this Mill Hill kit called Baseball Mitt. Luckily my favorite shop, Salty Yarns, had one in stock and sent it right to me. It is perfect!!! 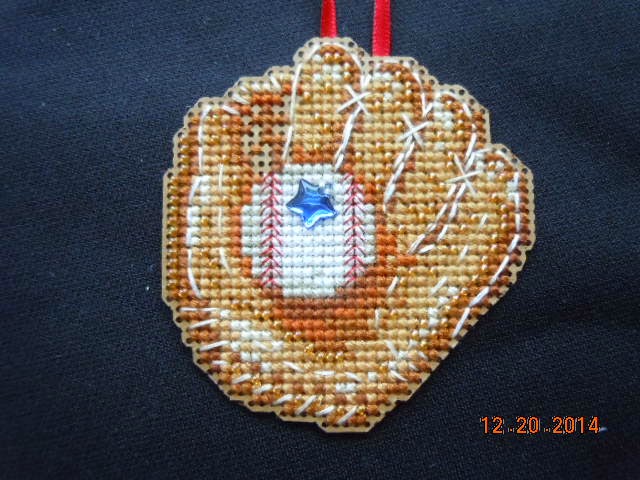 Next up is an ornament for my newest great nephew. I'm going to meet him for the first time tomorrow and was clamoring to get this done in time. His family celebrates both Christmas and Hanukkah so I did a double sided ornament with Santa on one side and a menorah on the other. Santa is from an old Leisure Arts book called 250 Christmas Quickies and I found the menorah on line as a free chart by Connie G. Barwick. I stitched it on 32 count Blue Spruce linen and thought the motifs looked nice against that background color. I'm loving this mini pom-pom trim as an edging!!! 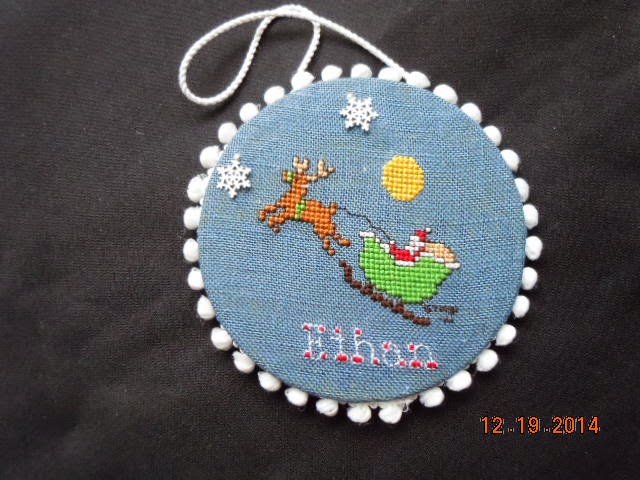 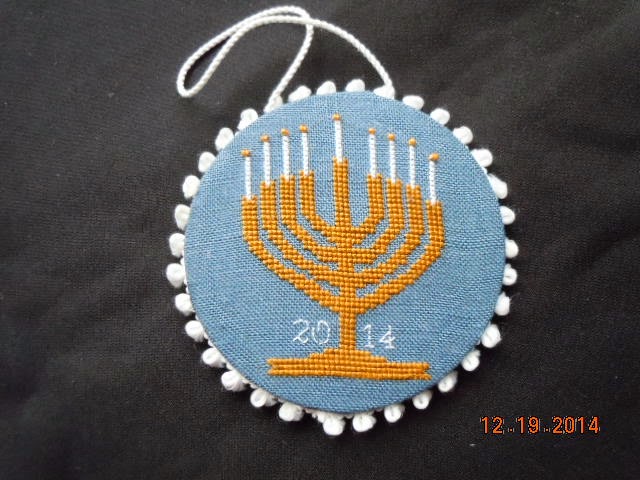 Last but not least, are three I've done for some other grand nephews and  a grand niece. These reminded me of our recent trip to Alaska and were very cute. They are from an old Better Homes and Gardens chart called Polar Cap Stars. I added the red bells instead of the tassel shown on the chart.


Well, I think I'm finished with my Christmas stitching. Now on to cookies and candies!!!

I wish you all a very Merry Christmas and Happy New Year! May it be filled with family, friends and lots of stitching!!!

Life has been very hectic lately. We have either been away or had company at home the last 4 weekends. On top of that, there is the frenzy of Christmas .....decorating, gift shopping, gift making, cookie baking, etc.... you all know the routine. I've also had a milestone in my life (perhaps one I'd like to forget) and am now eligible for social security!!! I don't feel that old, but I sure wish I could get some of those years back as I have so much more I want to stitch!!!! I'm jealous of younger stitchers and often wonder about all the fabulous things to come in the needlework world!! Oh well, I will just satisfy myself with the tons of things I already have to work on and push through it all!!!

So,here's my past month (buckle up for the ride)! I'm starting out with some shots of my granddaughters birthday. It was a Frozen theme and I think my daughter had some very fun ideas for the party. 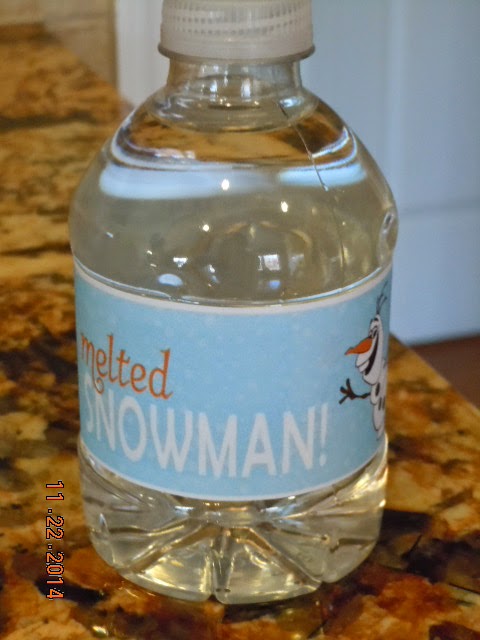 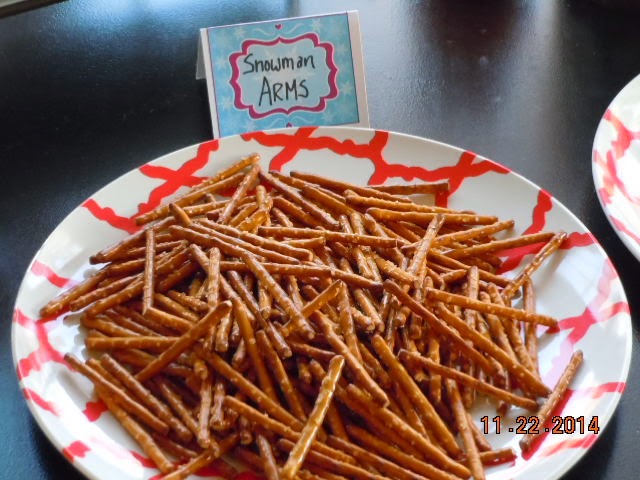 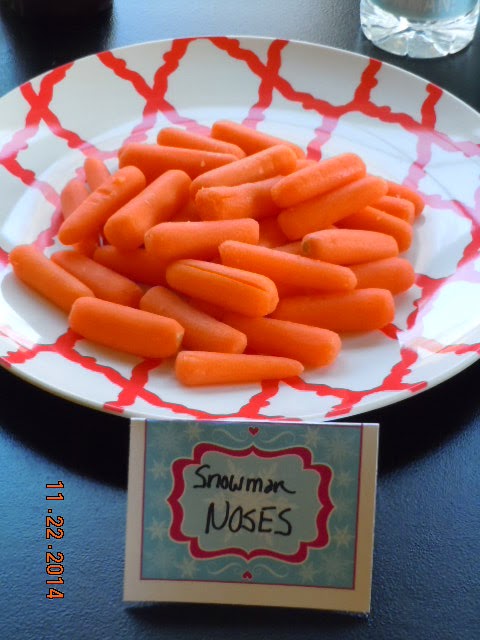 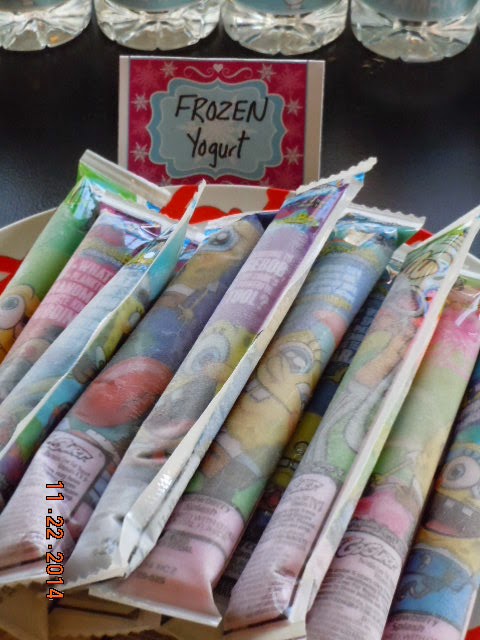 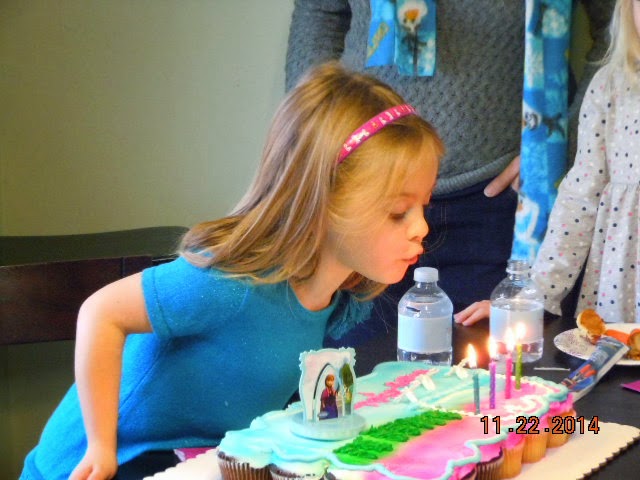 They even had an indoor snowball fight with white balls of yarn!!!

Next up was Thanksgiving at my house. We even had real snow for the kids to play in, so it was perfect. Our oldest daughter and family came up from VA, our younger daughter from NC, and my parents and various siblings from MD. It was hectic but fun-- I am very thankful for my family!!! 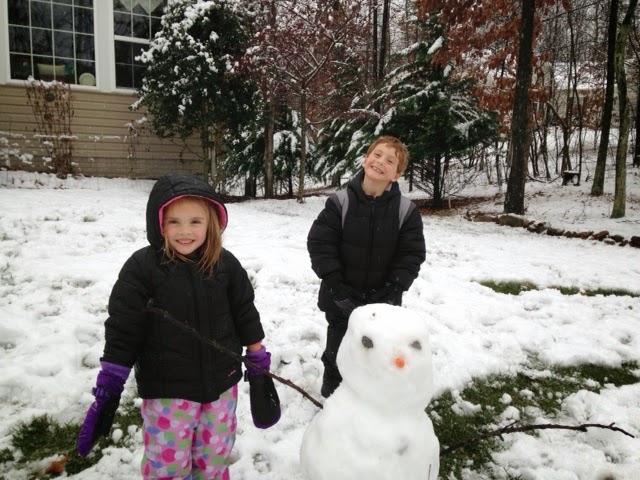 The next weekend w we were back to VA to babysit the grandkids, but it was a quick visit...down one day, back the next.

This past weekend, we drove to Baltimore for the annual aunts/cousins lunch with my Dad's side of the family. We had a big turnout (36 peeps) and it was so good to see everyone. Here is a shot of the whole group.....and keep in mind, we were still missing some relatives! 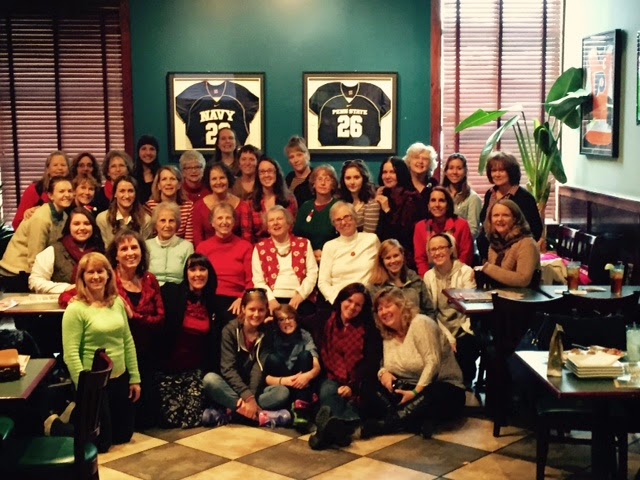 In between all this commotion my hubby managed to get himself a new, bigger motorcycle. Here's the happy guy with his new wheels!!! 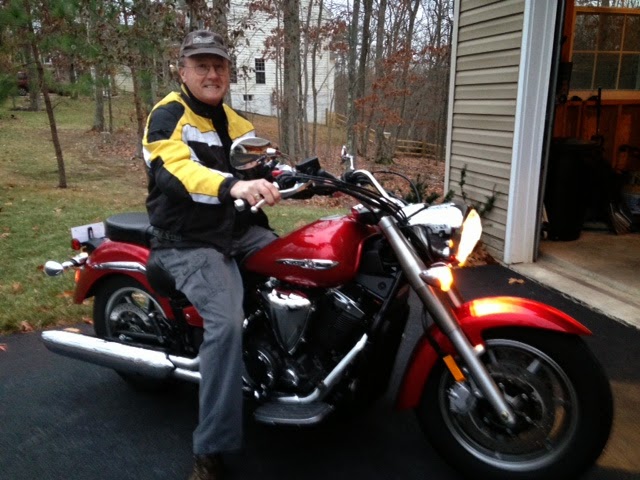 Now yes, I have been getting some stitching done. Some are gifts and I'll have to share those later, but here is my granddaughter's ornament for this year. I'm still working on my grandsons. 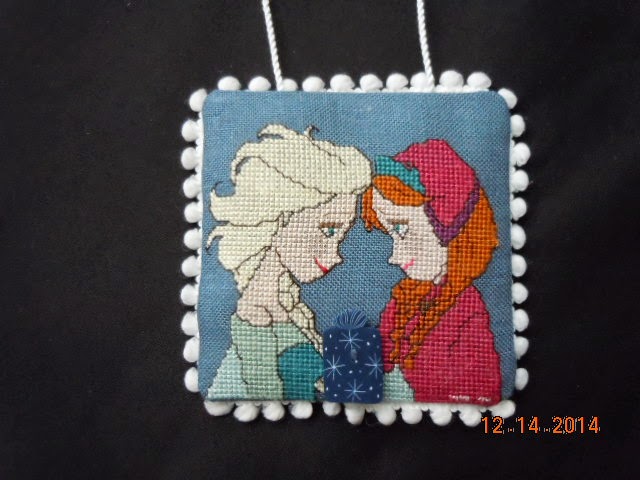 As I mentioned earlier I celebrated my birthday last week. I had to share the wonderful gifts I received from my dear friend, Paola. She knew I would be taking Sherri Jones's Button Book class in April and sent me the most beautiful glass and pearl buttons from Paris. I can't wait to add them to my "book"!!! 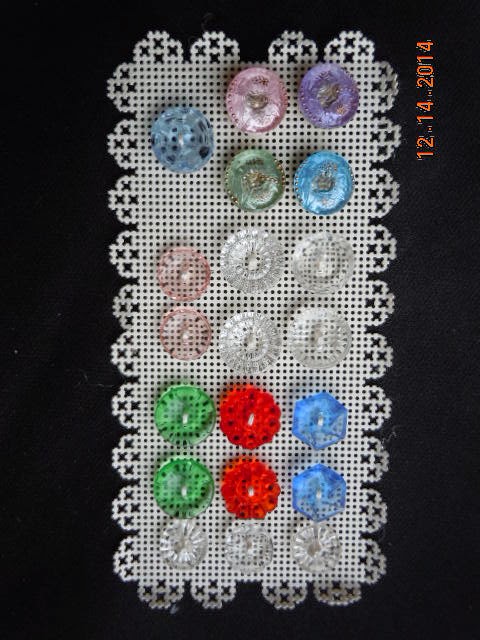 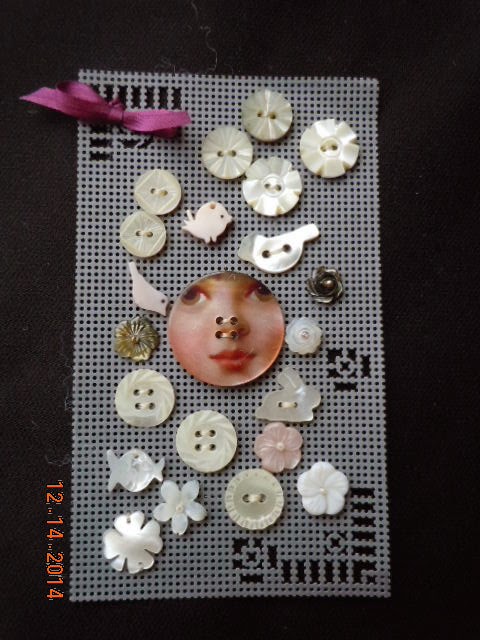 Paola also made me a beautiful Victorian styled needle book out of perforated paper. It is so delicate and lovely and I can only imagine the patience needed to cut out all the small details. Thanks Paola--you know I love it!!! 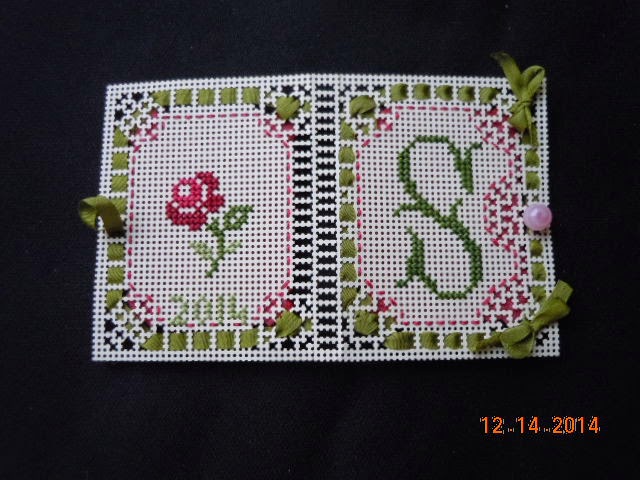 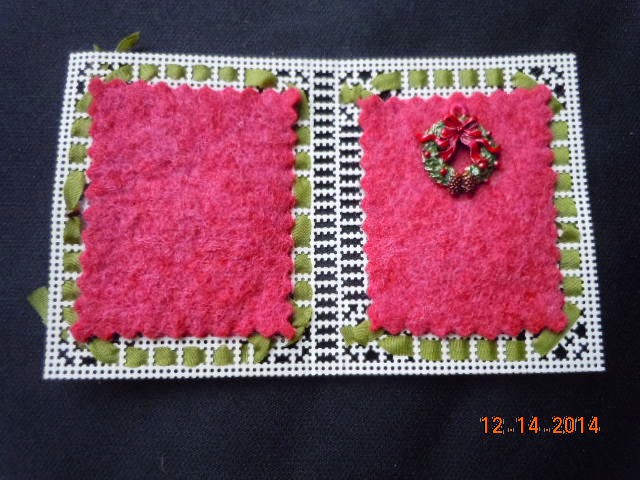 Well, I think that will be it for today; I hopefully haven't bored you to tears! I'll try to post again before Christmas, but if I don't, I wish you and yours a most festive and blessed Christmas/holiday season!