This heat wave has been quite beneficial to my stitching accomplishments. And that's about the only good thing I can say about it!!!! I don't tolerate these high temps very well....never have. I can remember, as a child, our welcoming front porch as a haven in the summer...perfect for reading, playing jacks and cutting out paper dolls. That was well before the days of A/C and I'm not sure how we ever survived the heat of those summers. Fans, popsicles, and cool washcloths on our heads at night! Now, I am extremely thankfuI for mechanical systems that can moderate our inside temps and keep me cool, calm and collected. So please mother nature, send some cooler temps our way!!!

Here is what I accomplished over the last few days, the book cover for the Prairie School Girl Etui...stitched as called for. 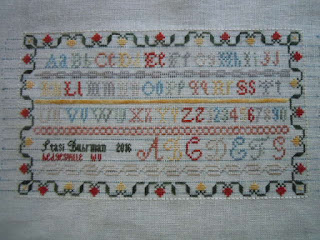 Now, it's back to stitching and binge watching Suits.

A new project beginning is an exciting time. It is always a thrill to put that first stitch into the virgin piece of linen. This time is a little different. The piece I'm starting is called Pioneer Girls Book Etui by Betsy Morgan and it requires a little fabric manipulation before the actual "stitching" begins. The outside book cover is based on a training cloth on which school girls of old would practice their needlework. Since they don't make this training cloth anymore, we have had to create our own by removing horizontal linen threads and reweaving with a blue thread. I've spent the last couple nights doing just that!!! It was a little tedious (there were 16 lines to be rewoven) but soothing in a way. I did find using a size 28 petite needle made the "over and under" a bit easier. And that being said, I am HAPPY to be done with it!!!


Here is a photo of the whole project so you can see where I'm heading. 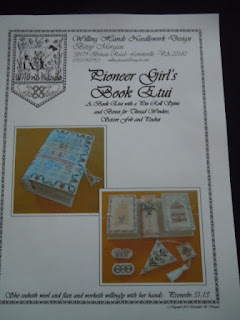 I am now anxious to begin adding some color and motifs! Please stop back and follow my progress.

Thanks for stopping by and your"twisted threads" of friendship!

with a bee-utiful hive. When I first saw this, I lusted after it, but it was a club piece, Queen Bee Needle Poke from Notforgotten Farm, and I was a little too late to the party. Luckily, I found it recently on the second hand market and was able to acquire it. Before I started, I had seen a post on FB where someone ( I'm pretty sure it was  Patti from the blog Winding Vine Wanderings) had tweaked the original design a bit. I was having an "issue" with the orange bee so I also changed mine to a very dark brown (DMC 3371--my go to substitute for black) and added an entry to the hive. I also changed one of the bands a bit to add back in some of the rusty color. I'll be attaching a bee button when I can unpack my stash and will have to wait to finish it then. All my plans to finish the Black Eyed Susan piece have gone up in smoke since I had PACKED the box!!! Oh well, the best laid plans!!!


Now it's back to my basket of goodies to pick out my next project!!!

Greetings one and all. I'm doing a little catching up today. I had completed two projects back in May/June, but since they were gifts, I couldn't share (until gifted) and then promptly forgot about it until today!

First up is ( I can't remember the exact title and chart is packed) a tiny thimble purse from With Thy Needle and Thread. I wasn't sure how this was going to "finish" but it wasn't that difficult....and yes glue was called for. I love the tiny buttons along the bottom. 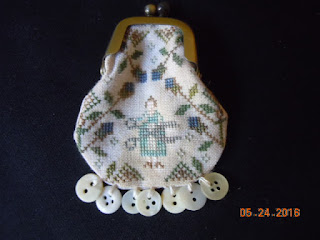 Next up is Shepherd's Purse by Shepherd's Bush. I had stitched this back in the 90's and did it again (recipient is a SB lover) with some updates. I used silks from my stash and happened to have the sweet ceramic button too. I lucked out and had enough original beads for all the beading required!!! Here are the two versions side by side...new on left, old on right. 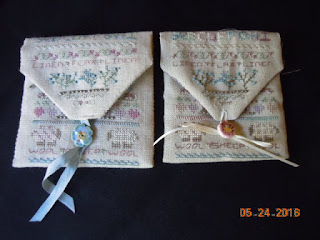 Now a few of the newer version:

I wanted to share the improvement in joining techniques. The original called for just whipping the sides together, which is what I did as I didn't know any better at the time. Now, after my classes with Betsy Morgan, I used her joining technique and I think it looks so much more polished! We certainly continue to grow with our stitching!!! 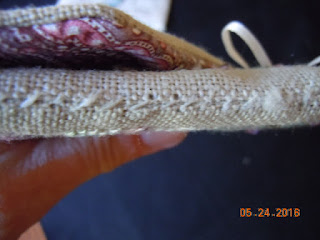 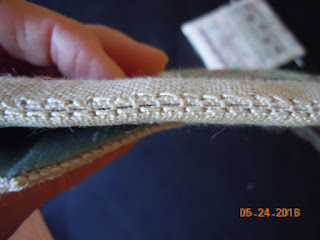 I have completed the stitching for the Black Eyed Susan project. I may try to see if I can manage to "finish" it with supplies/equipment I have on hand. We will see! The flower I'm using for the box bottom was a freebie chart I found on line and I'm using the "wrought by" tag in the top of the box. I really wish these would photograph better as the colors are so much more vibrant in person.

I forgot to share this photo last time, but this is hanging on our bedroom wall ..... a true telltale sign this cabin has a 70's vibe!!! 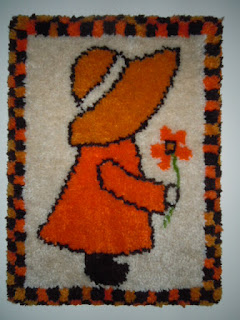 A Cabin in the Woods

Well, we closed on our house this past Monday and have moved on to our little cabin in the woods for the next two months. It's tight and it's cluttered----I think we brought way to much "stuff" not knowing what we'd need..or not. But it's only the hubby and me, so we'll be fine...and hopefully still talking on the other end. I think we're both looking for a little downtime after the frenzy of the last few months. I'm going to share a few photos of the cabin (this was before we moved in) because it is so cute and has a fabulous view out the back.

Do you get that 70's vibe??? My daughter is calling it a "Brady Bunch" house.

I have managed to get some stitching done this week. I brought a number of kits with me so I'd have everything I need together. I decided to start on one from Jackie Du Plessis called Black-Eyed Susans Workbox with Smalls. I thought it appropriate since I'm a Maryland girl (even though I've lived in other states) and it's the state flower. It's not a lot of stitching and I even thought I could get the finishing done. But, at the last minute, I decided to pack my finishing supplies, as it was just more "stuff" to bring. I may regret that decision!!!

I did make a mistake right out of the gate (that's my Preakness reference) and used the wrong color floss for the backstitching---it should have been the darker gold. But I think I like it this way and am cool with it. I did change the center of the flowers to a dark brown so they would be truly "black-eyed". So, here are the photos and I have to say upfront the fabric color is showing up MUCH lighter than it is. The fabric is a very beautiful, rich gold tone. (If I had my DMC color chart, I'd give you an approximation...but, of course, it is packed!!!  (I wonder how many times I'm going to say that over the next two months!) 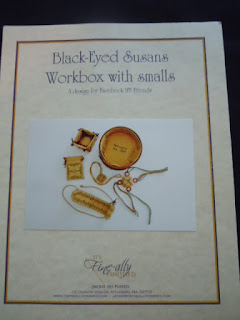 Well, that's it for now. If it's hot where you are be careful and stay in the A/C. They are calling for temps in the 90's here for the next week.

Thanks for stopping by and your "twisted threads" of friendship!  Keep cool!