Back from Our Trip and Adjusting to Reality...... 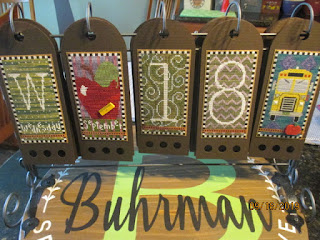 Let me start off by saying we had a fabulous trip out west where beauty abounds everywhere you look...if you ever get the opportunity...take it!!!

Just a heads up.....this will mainly be a recap of our trip with a bit of stitching news at the end. We flew in and out of Denver and did a BIG circle (over 1900 miles) in a rental (which caused us some anxiety as we noticed a couple hundred miles in we were driving on expired tags). We started our trip with a stop in Pinedale, WY, a cute little town that was very artsy...wish we'd had more time to spend there. Here are some flowers outside the restaurant we ate lunch in. The flowers everywhere were bright and luscious! Later I found that this was due to the altitude and a more intense heat from the sun.

The next day we hit Jackson, WY, but we didn't hang there too long; we were anxious to get to our next stop, Dornan's Ranch, a little bit north of Jackson with the Grand Tetons in our backyard, so to speak.

Here's our little cabin at Dornan's: 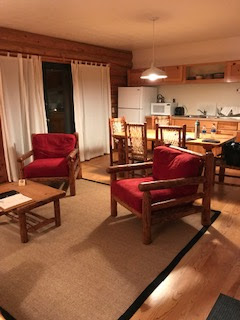 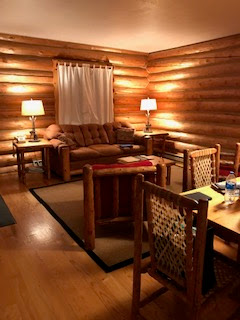 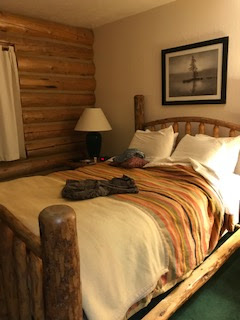 This was my favorite place we stayed--2 bedrooms, one bath, full kitchen and living/dining area right on the Snake River. We hiked.... 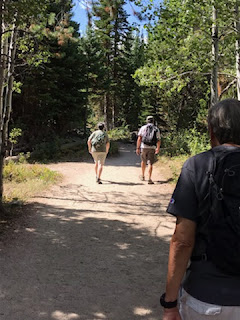 ...for two days (Rich and I want to return there for a week at some point). We also saw our first wildlife there outside Jackson.


Then we were off to Yellowstone for three days. Here we witnessed Old Faithful blow three times..... 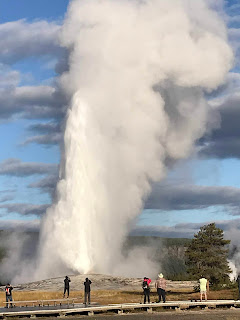 saw tons of geysers, hot springs and mud pots....it's kind of other wordly there.. 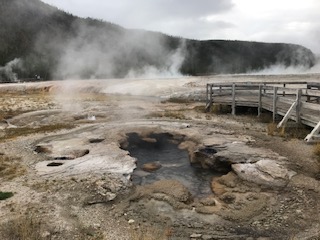 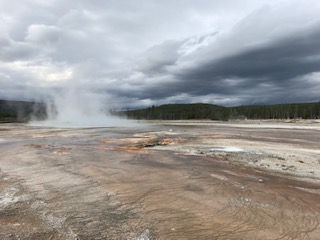 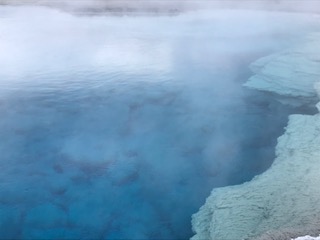 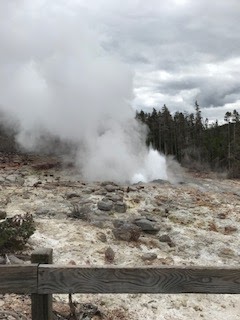 We toured one evening in this vintage yellow touring car.... 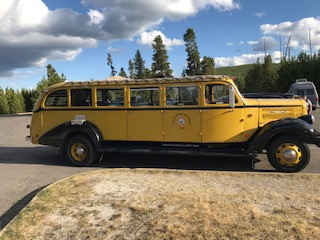 and had a tour of the Old Faithful Inn....this place is magnificent...very rustic but wonderful architectural design. (Sadly, we could not get reservations there but were in a nearby cabin).

So, I have to tell you a little story about the rainbow. The wife in the couple we went with and I have been friends since grade school. She had traveled across country for 8 weeks the summer of 1976 with another good friend of ours ( I was married and working at the time, so couldn't go). Sadly, that friend of ours passed away in 2002 but we felt we were getting messages from her the whole time we were there....things like the rainbow, a Beatles song (we were all big Beatles fans), a Let it Be medallion in a room we stayed in, etc.. It was good to feel her presence!

But perhaps, my favorite thing in Yellowstone was the Grand Prismatic. We were able to hike up to a fairly new overlook and see it from above. The colors around the edge are caused by bacteria...unbelievable!!! 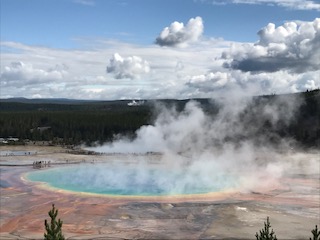 Are you still with me??? I know it's a lot, but I'm trying to get it done in one sitting. Next we drove to the Grand Canyon of Yellowstone....not to be confused with the Grand Canyon in Arizona..but imposing nonetheless. 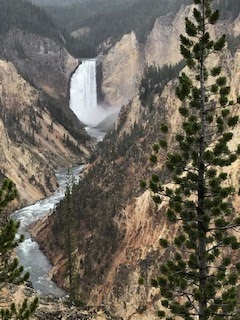 We switched to the Yellowstone Lakehouse, where we also stayed in a cute little cabin. We saw more wildlife, hiked and relaxed a bit in the lobby of the main hotel. 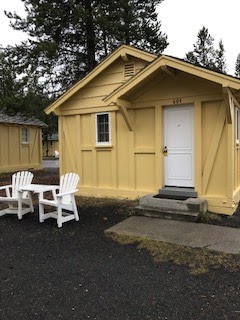 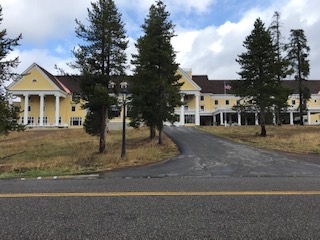 From there it was on to Cody, WY ,via the Beartooth Highway, where we stayed two nights in a cute little Airbnb two blocks from the main drag. Here we visited the Buffalo Bill Center of the West. Now, I have to say, we didn't know what to expect here, but this is a first class museum, associated with the Smithsonian, and it was fabulous!!! 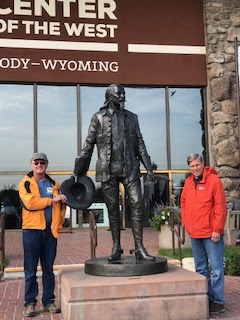 But perhaps the best part was I got to meet a fellow stitcher!!! Greta and I had "met" during the Common Threaded Stitcher month on IG and I knew she worked at the Center. I took a chance she was there that day ....and she was!!! We only got to visit for a bit, but we both felt we could have talked for hours...it was so nice to meet in person. And, Greta's husband is the director of the Heart Mountain museum which we visited the next day. Another top notch exhibit, though very sobering. This is the site of a former Japanese internment camp, just a few miles out of Cody....so hard to believe this happened in the US to US citizens....to be honest, we were all a bit shocked!!!

We attended a dinner and cowboy revue in the evening that was a lot of fun! 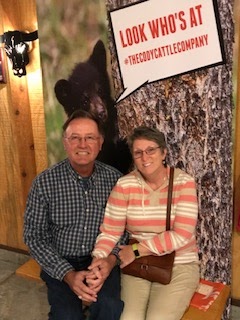 From Cody, we drove to Buffalo, WY where we spent the night at the Occidental Hotel, supposedly the most haunted hotel in WY. On the way there we hit snow at the higher elevations....luckily not enough to slow us down. 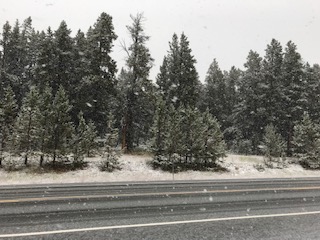 Here's an outside shot of the hotel, an old brothel where the likes of Butch Cassidy, Calamity Jane and President Theodore Roosevelt stayed. There was a car enthusiast group staying there (Austin Healys) hence the cars in the photo. 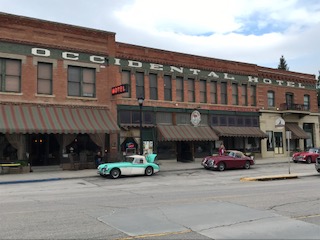 Here's some shots of our room that had lots of lovely doilies protecting the furniture. 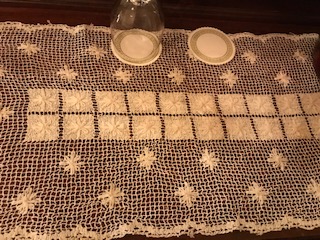 Now for any Longmire fans out there....The fictional town of Durant, in the Longmire series, is based on Buffalo, WY. The author, Craig Johnson, lives nearby and was actually in the restaurant where we were eating dinner. A number of stores have adopted Durant in their window displays. Sadly, we left early and didn't have time to wander the town, but did get to eat breakfast at the Busy Bee Cafe. 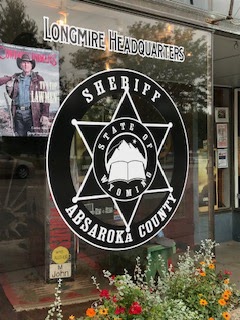 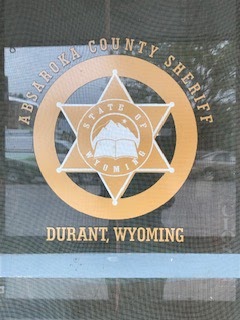 From here, we were on to our last stop...Mount Rushmore...a great place to end our trip. It was a little cold and windy but ice cream was had since it's based on a recipe from Thomas Jefferson. 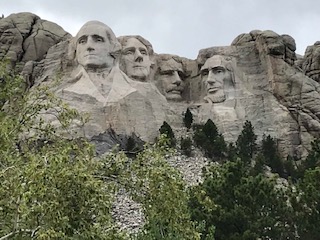 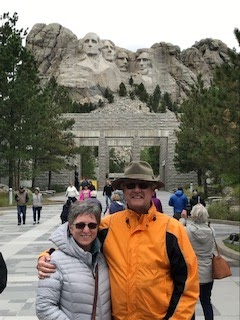 Now all that was left was finding a hotel for the night and starting our drive the next morning back to Denver for our flight home. Even though this recap was long, there was still a lot I didn't cover. So, if you have any questions, feel free to shoot me an e-mail or comment on the post and I'll get back to you.

Now some stitching.....sorry....I'm having gum surgery Friday and trying to get this all out of the way. I had great intentions of finishing ALL the background stitching on my Year of Celebration pieces....but....I only got two done. The roads were either two twisty or I didn't want to miss what was outside the car. 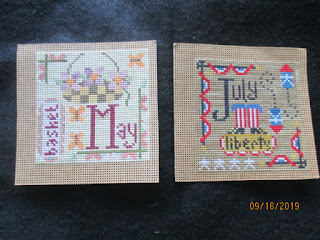 This was as far as I got on the Pilgrim I shared last post: 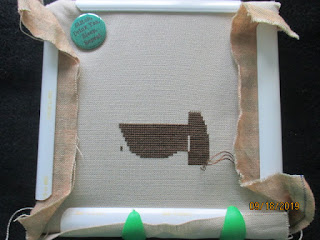 So, not much stitching went on...but I did come home to some stitchy mail. First, I had ordered this project bag kit from Brenda Gervais. The fabrics are pre-printed and you just have to sew together. 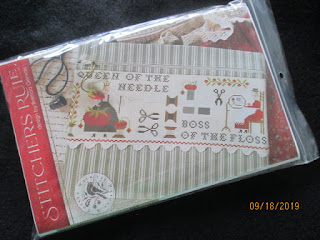 Then, I had bought three Need'L Love stocking charts on FB right before I left on vacation. 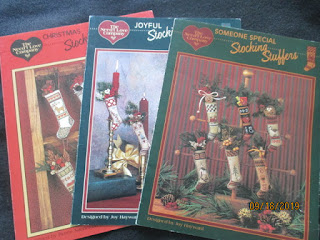 And last, but not least, our friend Vickie sent me this adorable chart...and yes, it has a bee! Thanks so much, Vickie! 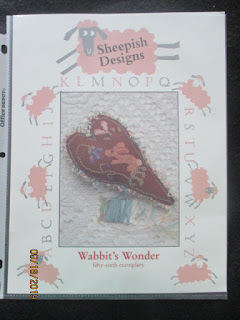 So, I think I'm outta gas but hope you enjoyed!!! Thanks for stopping by and your "twisted threads" of friendship!